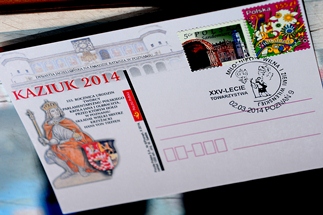 audience of the seventeen century Lithuanian tradition and connection of Jagiełło Dynasty with Poznan during the occasion of Kaziuk.

Kaziuk is the day of saint Kazimierz – the patron of Poland and Lithuania who died on 4th of March 1484 in Grodno as nearly 26 years old Crown Prince, would be heir to the throne.

The ceremony was started in front of the city hall by Tadeusz Jeziorowski and Krzysztof Styczyński with the information about images of the royal dynasty. After the bugle calls of Vilnius and Poznan and traditional goats striking as every year the showy past march to the stage of Jagiełło retinue and all artists participating took place.

Wielkopolanie presented the especially prepared for this occasion artistic performance. The audience could admire lively and impressive folk of Biskupianie form the area of Krobia and Domachowo and the performance “Wezmę ja żupan”. On the stage presented themselves also flageolet band, Akord choir, Duszniczanka folk group, Kaźmierzanka folk group and Vilnius Folk Band.

The commemoration of Kaziuk in this year was exceptional taking into account 25th anniversary of the activity of the Vilnius and Vilnius Land Friends Association. The organizers tried to feature the variety of the 25 years association activity. During the concert the Żurawina 2014 Prize were presented to the Vilnius Folk Band by Ryszard Grobelny, mayor of Poznan. Moreover the chairman of the Vilnius an

d Vilnius Land Friends Association was presented “The Silver Stamp of the City of Poznan”. Among cultural events, Kaziuk in Poznan is also the traditional fair, where the citizens of Poznan buy the Easter palms. The attendants could also buy among others Kaziuk’s hearts, Vilnius bread or traditional pancakes.

On the occasion of the jubilee, in the afternoon, on the stage of Centrum Kultury Zamek the gala concert of the Żurawina 2014 prize winner – Vilnius Folk Band and Wielkopolanie Folk Group took place. During the concert Marek Woźniak – the marshall of the Wielkopolska county awarded Mr Ryszard Limanowicz “for promoting the knowledge of Poland, Wielkopolska and Vilnius cultural heritage

At the end of the concert all artists together sang the “Marsz Marsz Polonia” song.

The whole event was under the auspices of Poznan archbishop Stanisła

and governor of Wielkopolska Piotr Florek.

Management and dancers of Wielkopolanie Folk Group express many thanks for Mr Ryszard Liminowicz and all members of the Vilnius and Vilnius Land Friends Association.