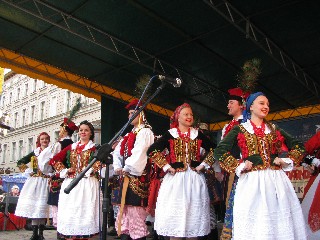 The celebration of Kaziuk 2010 in memory of saint Kazimierz the patron of Poland and Lithuania was held from the 4th till the 7th of March. The ma

in celebration was held at Stary Rynek on Sunday, and at 11 o’clock on the stairs of the city hall, with the flags of Wielkopolska that participated in the battle of Tennenberg hanging, the royal suite of the Jagiellon kingdom walked in. After the performance, with the sound of flageolets from the time of saint Kazimierz and his family, the son of Feliks Nowowiejski, the producer of the music of Rota to Maria Konopnicka lyrics made an appearance on the stairs of the city hall. The singing of Rota by the Folk group “ Wielkopolanie” under the instruction of Stanisław H

orbik with help from the audience was connected to the 100th anniversary of this tune. At the peak of dawn, those gathered at Stary Rynek in Poznan heard Vilnius bugle call and of course the Poznans bugle call. While on the tower the goats were head butting, at the feet of the city hall a march with the royal suite of the Jagellon kin

gdom with the folk group “Wielkopolanie” could be admired. On the scene the following bands presented themselves: The flageolet band from Swarzedz, ZGODA from Rudomin near Vilnius,  the vocal band Kazmirzanka, Schola Collegiale from Berlin and also the folk group “ Wielkopolanie”. During the first half of the concert, thousands from the audience could admire national dances while during the second half, due to bad weather, the audience listened to their favorite and well known demotic songs. The crowd visiting the Kaziuk fete had the opportunity to enjoy, like every year, black bread, and palms. During the fete from outdoor kitchens cepeliny was served, prepared from the restaurants of Poznan.
PK tł OP