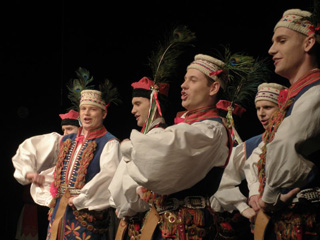 At the invitation of the association of the city Alytus, dancers and musicians of Folkloristic Group “Wielkopolanie” took part in the Internation Folk Festival organized in the city located in the central Lithuania, on the river – Niemen. The festival took place from 14th to 18th of December 2001. During this time “Wielkopolanie repeatedly presented their repertoire before many gathered, the local audience. Performances were held in the theatre in Alytus and auditorium university complex in the city of Vilnus and Kaunas. Popularisation of indigenous folklore dances was the Wielkopolska, Cracow, Kujawy, Rzeszów and Silesian lands. The group was preparing for each concert during specially arranged rehearsals. All participating groups in a joint dance were opening each concert. The presentations attracted wide public interest and were rewarded with thunderous applause. In spare time, thanks to the hospitality of the organizers, “Wielkopolanie” visited the cities of Vilnus, Alytus and Kaunas. In each of these trips a qualified guide guided the participants.

Although the weather was not always very nice, during the whole trip there was a positive atmosphere. On the ay back, all members of the group were involved in preparing the plan of the next events, which will be organized in the coming anniversary year. Although it was one of the shortest trips, it would be memorable for everyone. Thanks to successful performances the next part of international audience could have explored our country’s rich folklore.

Several hours after returning to the country, dancers and musicians of “Wielkopolanie” sat at the Christmas table. The most beautiful carol – “God is born” they began their Christmas meeting. Along with the dancers of the group there also sat friends, acquaintances and former dancers of “Wielkopolanie”. To the sound of a band everyone sand the most beautiful polish carols and pastorals and after the official acknowledgements divide the wafer.

The year 2012 is the year of Golden Jubilee of “Wielkopolanie” Inauguration of celebrations will take place on January 6th when the dancers and musicians will present the most beautiful carols and pastorals to the inhabitants of the city of Poznań. “Carol tramp” set off form the tramp stop on the Zwierzyniecka Street at 2 p.m. and 3.10 p.m and will stop on the Aleje Marcinkowskiego and Rynek Wildecki.

Everyone who wants to sing carols with “Wielkopolanie” is welcome.