„IN OUR TRAVELS WE VISITED MANY CITIES…” 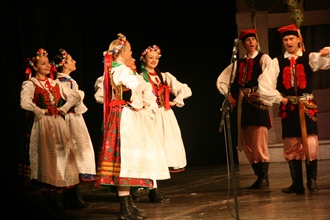 Between 4th and 11th of June Folkloristic Group took part in the International Folk Festival in Batumi in Georgia. This is 51th country, which in their history the artists from Poznan visited promoting Polish tradition, culture, dance and songs.

Traditionally Wielkopolanie began their journey in the group office, they left for Berlin, where they waited for a short flight to Istanbul. But already at the beginning of the journey began to experience problems.

The plane, which had the dancers take was delayed. When the artists arrived in Turkey, with hours of time that they had to change was only a quarter of an hour. Wielkopolanie frantic race over half the length of the airport rush through red signals LAST CALL.

The question was whether the air

port staff was able to move luggage and costumes, bothered dancers to Tbilisi, where they could breathe when at the belt started to appear known cases.

But it was not the end of the nearly 24-hours journey. For Kobuleti remains over 300 km of the road. The group had to travel a small bus. 120 km/h in the mountains, winding roads, overtaking on the third and squealing brakes, that was the style that Georgian license

Dancers after unpacking luggage went to the local market, and in the evening went to Batumi to enjoy themselves this famous resort.

The next day, the dancers began preparations for concerts and of course for the most important review. Several hours trial was admired by staff and guests. At the beginning “Wielkopolanie” gained recognition spectators who came to class.

Review groups was held at the Theatre in Batumi. Before was a brief attempt for all groups participating in the festival. It was, apart from Wielkopolanie, a team from Malaysia, Turkey, Russia, Nepal and children’s group from Georgia. Each group presented three five-minute performances. Wielkopolanie shows folklore of Rzeszow, Greater Poland and one of the national dance from Cracow. In the evening gala was held. Numerous publications arrived, filled all the seats in the auditorium. The show began with children’s group from Georgia, whose power every other group might have envied. Then the scene presented Wielkopolanie. At the outset, they were greeted with loud applause. At the end of more than two-hour concert was held awards.

First prize for the best performance

During stay in Georgia artists once again went to Batumi, this time for all-day tour with a very nice lady guide.

Dancers started for the new part of town, where they saw houses built just 4 years ago, as well as many skeletons still emerging buildings, such as polytechnics. Wielkopolanie had the opportunity to admire the promenade, park and university areas. Then they went to a restaurant where eating the typical Georgian dishes.

After a short break the tour guide took dancers to a small village in order to take a dip in a mountain waterfall. Tour ended at the sea, spectacular show “dancing fountains”.

Georgia is a small, beautiful country with the fastest growing countries in the world. Mountainous area and nearness to sea that make Georgia more and more tourists coming here, therefore state policy is focused on the development of tourism which witnesses were “Wielkopolanie”.

The Georgian cities and Batumi of cour

se are a vast construction site where history is intertwined with modernity. And what is associated Poles with Batumi??? Of course, with tea fields, about which sang Filipinki. Unfortunately the festival organizers said that the tea fields is already gone, but the song “Batumi” of Filipinki team was accompanied Folkloristic Group “Wielkopolanie” during their stay in this country.