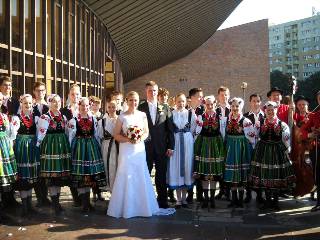 On 7th of June this year Folk Group “Wielkopolanie” witnessed of the Barbara Ławicka and Dariusz Kowalski wedding ceremony.

Barbara began her adventure with the folklore of more than 20 years ago, as a dancer of Children’s Folk Group “Cepelia-Poznań”. In 2004, she joined the Folk Group “Cepelia-Poznań”, which soon was renamed to Folk Group “Wielkopolanie”. During his long career, Barbara has presented Polish culture during hundreds concerts both in our country and abroad. During her studies at the University of Technology successfully combined dance in the group and work at the club Alibi, where she met her future husband – Darek. Initially, they shared time together at work behind the bar, but soon found out that they are to each other much more than just colleagues from work. Christmas Eve 2012 years was one of the most stressful days of Darek’s life – then he proposed Basia. Obviously, the answer could only be one!

And so, after months of preparations,on 7th of June 2014 young couple stood at the altar where with the Go

Bride and Groom guard of honor to the Church introduced the dancers dressed in very colorful Łowicz costumes. In addition to the assistance of the Folk Group, the ceremony was graced by the beautiful singing of Aunt of the Bride. After leaving the Church, the young couple were pelted by confetti and coins – for luck! And then shared photos and good wishes, during which the Folk Group „Wielkopolanie” performed songs from all over the country, at the end of course, the traditional highlander “Sto lat”. The ceremony wedding newlyweds drove a luxury car, and even I was there the honey and wine drinking…

We wish the newlyweds much love and joy which  all the time surrounded by their loved ones.