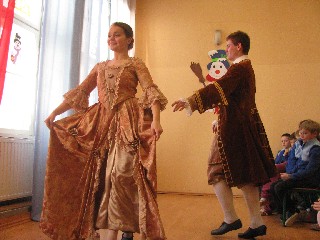 From the beginning of January till 5th of February 2010 dancers from folk group went in the second part of the tour presenting dances of Renaissance, Baroque and XIX century.

Poznan artists visited kindergartens and schools presenting historical dances in 28 localities in their region. Artists presented to gathered kids how people were dancing on courts and castles in France, Burgundy, England, Italy or Poland. During the whole tour group members performed dances of Renaissance, Baroque and XIX century. Audience had many possibilities to see inter alia pavane, galliard, minuet, polonaise, gallop polka and many, many more.
The most awesome thing for major part of audience was possibility to try to dance French’s branles danced in past epochs, witch was showed by happy faces and great applause in the end of auditions.

Currently “Wielkopolanie” preparing for performances which will presents on the educational fair in Poznań.
PK tł MO