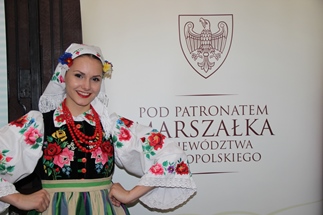 Nationwide action “Heard Band” was initiated by the Polish Section of CIOFF at the initiative of Folk Song and Dance Ensemble of Warsaw University “Warszawianka” in 2009. Over the years more and more folk groups from all over Polish, organize charity concerts for the benefit of people in need various kinds of assistance. As you can read in the letter of the President of the Polish Section of CIOFF George Chmiel: Hearts band can give even a partial temporary relief and joy to the sick people and those in need of financial or spiritual support. It can also be our common contribution to their psychological support and strengthen the faith in another human being.

Encouraged by the idea of hepling Folkloristic Group “Wielkopolanie” and Children Folkloristic Group “Cepelia Poznań” with a huge organizating help from Friends of Folk Culture Association “Live up to folklore” on 17 May 2015. at the Cultural Center “Dąbrówka” organized and Poznan Gala Charity Concert “Hearts Band”.

The performance, leading by a dancer from “Wielkopolanie” and a President of the Association – John Galasiński, was preceded by Mrs. Barbara Grochal`s speech who is a representative of the Polish Society of Palliative Care Branch in Poznań. Ms. Barbara thanked the organizers that they decided to transfer proceeds from the concert for the purchase of equipment for physiotherapy for the Hospice Palium in Poznan and also explained why the Hospice Volunteers gave to guests butterflies, a symbol of their voluntary service.

Nearly 100 artists presented their repertoire for 2h. Mostly the repertoire was from Wielkopolska region and national dances but also the members of the dancers showed the folklore of other countries and the urban dance from Poznań. So there couldn`t miss Old Marych with his bicycle.

During the meeting there was also held an aucion transmitted by the Marshal of Wielkopolska Region, Association and donors. In total, the amount of cans collected 6 906,45 PLN.

Proceeds from the concert will be donated to the Polish Society of Palliative Care, which will allocate money for the purchase of equipment for physiotherapy for Hospice Palium in Poznan.

Hearts bands, taking place in the whole Poland, show that folk bands that are not only cultivate music

and dance traditions of our country, but also a multitude of great people who want to help those in need. We are pleased that we can include Folkloristic Group “Wielkopolanie” to that group.

The organizers would like to thank the people and institutions that supported the organization of the concert.