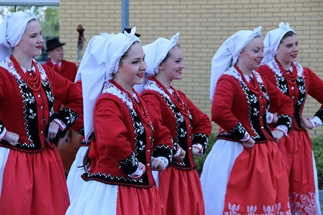 Dozens of events, concerts, meetings and picnics planned on May Adam Mickiewicz University during the Great Picnic organized already for the fifth time in the Decade Jubilee of University.

Folk Group “Wielkopolanie”, which since 2001 cooperate with the largest University in Wielkopolska region presented twice during these events.

On 9th of May during Sports Day organized by the Department of Physical Education and Sports University Club University Sports Association AMU.

Adam Mickiewicz University Sports Day was held under the patronage of the Rector of AMU prof. Bronislaw Marciniak in front of the Sports Hall AMU Morsko.

Grand Opening concert began Folk Group “Wielkopolanie”, who presented not only for the authorities of the University but also for more than 4 thousands of students who participated in sports day.

Throughout the day, students competed in many sports e.g. in spring run, aero marathon, judo, basketball, swimming, football and many many more
Sports competition took places not only in Poznań. In paralell students competed in the College of Europe name Pope John Paul II in Gniezno, Collegium

Polonicum in Slubice and the Faculty of Pedagogy and Arts in Kalisz.

Accompanying the event were National Swimming Competition of Higher Education Students with Disabilities.

On 11th of May for Morasko Campus between Department of Physics and Department of Mathematics and Computer Science, Family Festival was held for employees, retirees, graduate students and their families UAM, also organized as part of the Great Picnic.

After the ceremonial opening on the scene presented Folk Group “Wielkopolanie”. National and regional dances were applauded by the assembled participants of the festival. For the guests there were prepared numerous games and activities for example: balloon zoo and florist, castles fpr jumping, sport competitions, eurobungoo, knight camps and many many more.