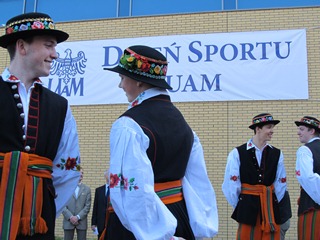 Dozens of events, meetings and competitions are held in the month of May in Poznan in the Great Picnic of Adam Mickiewicz University.

On 8th of May for the fourth time authorities have invited students of the Academy for Sports Day, organized by the Department of Physical Education and Sports University Club University Sports Association AMU.

Adam Mickiewicz University Sports Day was held under the patronage of the Rector of AMU prof. Bronislaw Marciniak in front of the Sports Hall AMU Morsko.

“, who presented traditional polish folk dances not only for the authorities of the University but also for more than 4 thousands of students who participated in sports day.

Throughout the day, students competed in many sports e.g. in spring run, aero marathon, judo, basketball, swimming, football and many many more.

Sports competition took places not only in Poznań but also in Słubice and Kalisz in nonresident departaments.

For the third time in the history of the University, on Saturday, on 11th of May 2013 for Morasko Campus between Department of Physics and Department of Mathematics and Computer Science, Family Festival was held for employees, retirees, graduate students and their families UAM, also organized as part of the Great Picnic.

After the ceremonial opening on the scene presented Folk Group “Wielkopolanie”.

National and regional dances were applauded by the assembled participants of the festival.

For the guests there were prepared numerous games and activities for example: playing with balloons, obstacle,  course race ping-pong balls, fun for “big and small” with scarf KLANZA,

knights’ camp, and many many more.

For the entire month of May will be more numerous meetings and events and the Great Picnic on 26th of May ends by general university Jubilee Rally from Poznan to Gniezno, willing teams can do  this route on foot, by bike or by car.

Adam Mickiewicz University  places in rankings of the top Polish universities. Currently at 49 fields and 183 specializations studied more than 47 thousand. students of first and second degree, and more than 1,300 graduate students.