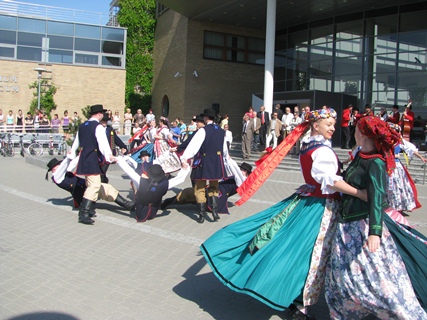 Great Picnic of AMU 2011 consists of tens of events, meetings and competitions taking place at the University’s grounds almost in the entire city o

f Poznan.
Among the artists performing during the festivity of the largest Poznan school was Folk Group “Wielkopolanie”. The group has been cooperating with the AMU since 2002, and through this cooperation performed twice during the Great Picnic.
On the 11th of May 2011 Folk Group “Wielkopolanie ” presented themselves once again during the University’s Sports Day.
Sports Day was declared open by the Rector of AMU – Prof., doctor habilitatus, Bronislaw Marciniak. During the whole day, on all of University’s sport facilities, games were played in different disciplines: volleyball, basketball, swimming, mountain biking, rowing ergometer, aerobic, and many others.
Wojciech Frącek , one of group dancers and also an AMU student, participated in the men’s race, finishing with 7th place.
During the concert „Wielkopolanie” performed  in front of numerously gathered students of the University and  it’s governing bodies presenting dances of Silesia. This year Sports Day took place as part of the Great Picnic organized by the University.
A few days later, on the 14th of May, “Wielkopolanie” for the second time showed up on stage – this time at the Family Fest for AMU’s employees, retirees, graduate students and their families (Family Fest was organized for the first time in University’s h

Eastern Cracow. Among the attractions there was also a concert of jazz music, performances by children of AMU employees, folk dances and fire dancing show. Representatives of the Faculty of Educational Studies  took care of providing good fun for the youngest participants of the Fest.
In specially prepared tents people could take part in art workshops, play three-dimensional Chess and even learn the art of juggling.
All willing to do so could check their physical fitness in contests, games and recreational activities under the watchful eye of staff of the AMU’s Center for Sport and Exercise.
PK tł. PW