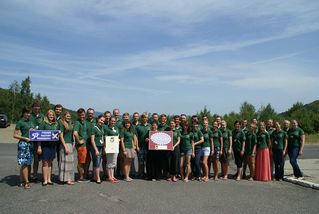 Beskids Culture Week, the largest in the country and one of the biggest folk events in the world, celebrated its 50th anniversary.

During the great feast of folklore, for 9 days in Wisla, Zywiec, Makow Podhalański ,Szczyrk and Oswiecim was attended by over 100 song and dance groups from around 30 countries from different continents, 4,000 dancers, singers and musicians, gave more than 50 several hours evening concerts at large outdoor stages. The concerts were accompanied by numerous exhibitions, fairs and meetings with folk artists.

This year, more than a dozen groups from around the world took Wisla’s audience on an extraordinary, very exotic journey. On stage at the Amphitheatre audience watched thousands of artists from Brazil, Paraguay, Turkey, Romania, Bulgaria, Montenegro, Czech Republic, Macedonia, Albania, Serbia, Slovakia, Ukraine, Hungary and from Poland. Folkloristic Group from “Brenna”, Folkloristic Group “Siemianowice” and Folkloristic Group “Wielkopolanie” represented our country. Their stage struggles assessed International Artistic Council composed of distinguished experts in folklore, ethnomusicologists and choreographers from around the world.

The aim of international meetings is to cultivate and promote the richness of the folk culture of different countries by groups of presenting the most valuable and authentic cultural values ​​through singing, music, dancing, ceremonies and folk customs. Participation in these groups can take only cultivating the folk traditions of a particular region of their country, it was also desirable to song, music and dance were presented in its traditional form, in conjunction with the ceremony, custom, fun and work. The nature of the show will naturally have to function in a traditional native culture.

FOR A STYLISH PRESENTATION OF WIELKOPOLSKA’S CARNIVAL CUSTOM IN UNIFORMS, MUSIC, DANCING AND PROPS

defeating many foreign groups in this competition.

50th Beskids Culture Week is not only a concerts platform, but also the team parades in many cities. “Wielkopolanie” participated in the parade of international teams in the Wisla. During the procession we presented dances, songs and costumes of Bambry and the people of ancient rural town of Poznan. The latter, for the first time in history have been presented on stages in Beskids Culture Week, outside the home Poznan. For the first time in the history of Poland, folklore of ancient rural town of Poznan was moved and appeared on stage to the audience during a ending concert of the celebration of the 50th anniversary in April 2013.

International Folklore Meetings were held under the auspices of the International Council of Organizations of Folklore Festivals and Folk Arts (CIOFF), and the main organizer, like the Beskids Culture Week was the Regional Cultural Centre in Bielsko-Biala, which works closely to Wisla Cultural Centre.