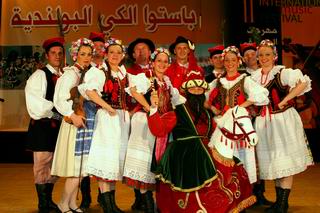 In the first decade of June dancers and musicians of a group have an opportunity to present polish culture in 42nd country in its history. They were (as the organizers said) the first polish folk group which has showed its folk culture in Kuwait’s land. After 4000 km long way, the first view has reminded them that the country which they are arriving to is a place of a different culture. The travelers (men) wearing white long dress called “jalabiya” and women had “hijabs” and “burkas” putted on. Next surprise was the temperature – 39 degrees during the night and 45 degrees by day (in the shadow) was a quite new experience for our artists.

The 11th International Music Festival in Kuwait is cultural event of a very high prestige perfectly organized by National Council for Culture, Art and Literature.
The opening ceremony took its place in the Kuwait National Museum gathering numerous spectators and VIPs, for example Minister of Information and other diplomatic agents. During the concert the public could listen Kuwait National Orchestra playing together with Kuwait Folk Group. This outstanding combination impressed everyone. The final presentation made famous singer Halifa Badr. “Wielkopolanie” have an opportunity to chat for a while with diplomatic agents and to make together a photo.

Next day was a time for presentation of polish folklore. After many hours of reheasals and cooperation with technical and sound stuff of the theatre “Wielkoplanie” have presented their indigenous dances and songs in one of the Abdul Aziz Husain Theatre. A huge stage, beautiful decorations and specially prepared banner with photos of our dancers that was hanging at the back of a stage together with invitations in Arabic for the concert of the polish group was a very pleasant surprise for all artists. In this ceremony took part many VIPs: Director of a Festival Muhammad al-Ususi as well as members of National Council for Culture, Art and Literature and diplomatic agents. During more than hour “Wielkopolanie” have presented dances and songs form regions as Great Poland, Upper Silesia, Silesian Beskid, Cracow and also the national dances: kujawiak, oberek and krakowiak. The concert was ended with the typical picture with lajkonik that was warmly taken by the audience. All ceremony was recorded by KTV1 (Kuwait National Television). In the flash-lights group has taken many acknowledgements and congratulations for a high artistic level and for many exciting moments by their lively dance, happy songs and colorful costumes. Next day we could read about this presentation in the newspapers.

Polish artists have an opportunity to see some of the most beautiful parts of Kuwait City. This small (29 thousand habitants) capital city with its very modern and tidy streets and great hospitality enchanted polish visitors.
This wonderful tour was completely different from the rest of the tours of a group.
Dancers and musicians have hope that (as organizers said) they will have a chance to show polish culture in others Arab countries.