FIRST CELEBRATION OF THE PRUS STREET 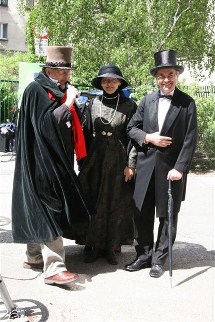 „First Celebration of the Prus Street – that is Bolesław Prus invites You” has been the first event of this kind organised by Provincial Public Library in Poznań.

On 12th 05. 2012 at 10:00 director Helena Bednarska welcommed guests dressed in 19th century style and officially opened the street celebration. Bolesław Prus,who was played by Jan Janusz Tycner told guests about living and working in the 19th century. Sitting on Prus bench he was reading parts of „Lalka”to make guests familiar with the creation of the artist. Provincial Public Library also organised a walk through the area of Jeżyce. The most interesting, commonly unknown and forgotten places in this part of Poznań have been revealed by a to

Meanwhile, at plaza by the library, animations for children have taken place. Folkloristic Group „Wielkopolanie” prepared a show. After the dances of Bambry Poznańskie, representing the district of Jeżyce, mister Piotr Kulka said more about traditional clot

hes of inhabitants of Poznań. After that, for the first time, he introduced original outfits of villages around Poznań. He also mentioned dances and games common in 19th century Poznań. „Wielkopolanie” have taught audience the most popular ones. In the end, group presented dances from East Cracow. There has also taken place a photography competition for habitants of Jeżyce.

Provincial Public Library with Folkloristic Group „Wielkopolanie” invites You for the Second Celebration of the Prus Street in 2013.