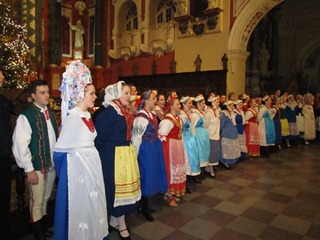 In the special evening of Epiphany Holiday in the Saint Anthony Church Folk Group „Wielkopolanie” concert of Carols began 2014 year.

During the Christmas and New Years’ time City of Poznan invited residents of the city and province for singsong of Christmas carols.

In the fourth of Poznan Caroling performances were held choirs, folk groups and artistic, which took place in Poznan’s churches.

Among the artists invited from Poznan Caroling was also Folk Group “Wielkopolanie” which the third time sang the most beautiful and popular Christmas Carols with the residents of the home town.

They were created when the ecclesiastical authorities in the first half of the eighteenth century banned nativity scenes, and then began to shape the folk tradition.

Their theme is wandering shepherds to Bethlehem among Polish landscape. “Wielkopolanie” have in its program the pastorals of the late nineteenth and early twentieth century. Developed by Stanislaw Horbik and played on traditional folk instruments were performed during the concert. The program includes pastorals from Rzeszow, Spisz, Krakow, Warmia and Mazury, Silesian region and many others, performed by the “Wielkopolanie” were combined according to the tradition of dancing to the Jesus.