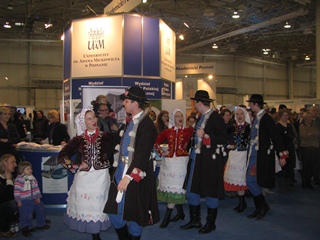 During this year Education Fair in Poznan, which took place from 3rd to 5th of February Folkloristic Group “Wielkopolanie” presented twice

during performances promoting Adam Mickiewicz University in Poznan. Education Fair is a mutual project of Teachers’ Improvement Center in Poznan, Wielkopolska Marshal Office and International Poznan Fair. In one place public and private schools of all levels presented, their offer also schools from Czech Republic, Denmark, Finland, The Netherlands, Germany, Hungary and United Kingdom showed. The fair was accompanied by the exhibition of publications of Provincial Public Library and Center of Animation of Culture in Poznan.

ces of the regions of Rzeszów and Eastern Kraków.

On 3rd of February, after the performance on the Fair “Wielkopolanie” organized for their friends and former dancers XXVII Carnival Ball. For almost 200 guests “Wielkopolanie” traditionally began the ball with noble polonez and mazur. After the performance of these eldest polish national dances, dancers invited gathered guest to common dancing of not only polonez but also polka and oberek. After welcome of the guest “Wielkopolanie” presented specially prepared artistic program. It referred to the life of group but “behind the stage”: the rehersal, performances and international voyages. There was also prepared an exhibition of pictures taken during last-year tournee in Mallorca, Estonia, Slovakia and Lithuania as well as great raffle.

The second time in the history the group has chosen, in secret voting, the best dancer of year 2011. The title of “Wielkopolanin of the year 2011” was awarded to Agata Pospiech for her enormous work for the group during whole year.