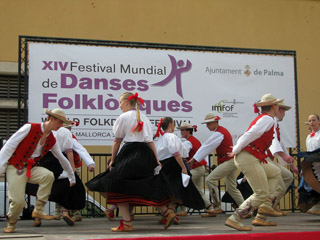 The journey began with a symbolic “Dyngus Day” organized by members of the team during the way to Berlin. From there “Wielkopolanie” got flight to Mallorca. The rest of Easter’s was celebrated with other folk groups in Palma.

The next day, representatives of Wielkopolanie participated in a meeting with the city of Palma with delegatio

ns from other 35 countries and the organizers. At night, all groups celebrated the opening of the festival by making big parade on the streets od Palma. Wielkopolanie made impression on the organizers and were invited to a special concert held next day.

Wednesday April 27 began with a full mobilization of the group, because at midday, they were going to present national dance “Krakowiak z Lajkonikiem” in the competition concert in TRUI TEATRE, and in the evening the team presented lively dances and chants from the south of Poland on special invitation from the organizers.

In the subsequent days of the festival, on the stages located in charming places scattered in the old part of Palma’s, Wielkopolanie appeared eight times presenting national dances from all regions of Poland. In addition, on a Friday afternoon “Wielkopolanie” participated in dance

workshops, where first of all groups teached Polish dances and folk plays of their region. In a cheerful mood, the rest of the workshop was continued by representatives from England and Turkey. After the workshop, group went to a concert in the beautiful village Selva. After the concert, “Wielkopolanie” along with group from Austria participated in the Fiesta night with inhabitants.

On Saturday, April 30 the group re-presented “Krakowiak z Lajkonikiem” on the few stages. In the afternoon, “Wielkopolanie” went to amphitheater in the park “SA RIERA” and with other teams participated in the final concert of the festival. The ceremony was a very joyous moment for group members, band and directors. Festival’s international jury awarded “Wielkopolanie” with two awards: for the best singing/music and for the best dances.

Early Sunday morning a group from “Great Poland” region had time to explore the sights of Palma. Under the leadership of the Spanish keeper, they visited the Castell de Bellver and the Cathedral in Palma de Mallorca. After that, with great sorrow they packed up the bus and went to the airport. In the early morning of May 2 the team arrived to Poznań. It was amazing and successful journey. Already on May 4, Folk Group “Wielkopolanie” are going to begin a tour by visiting Polish schools and kindergartens. This time, they will present dances from the Renaissance, Baroque and nineteenth centuries.