DANCERS OF THE WIELKOPOLANIE GOT MARRIED 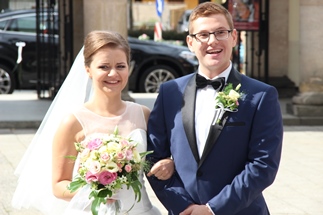 It’s difficult to say properly, when the new spouses have met. Hania began her adventure with folklore in 1997 in the Children’s folk group “Cepelia-Poznan”.

Jan to joined in 2000, but at that time they have’ not the opportunity to meet, cause John, as capable a man fashion, went straight to the older group. After a year, Hania also joined this group, but then nothing predicted this love story.

After some time they created a group of friends with other dancers, who not only met on the activities, but also spent their free time together. In 2006 Hania and Jan joined the folk group “Wielkopolanie” in which they dance to this day. In the same year they both began Instructor Qualification Course in the Centre of Culture and Arts in Warsaw. Their friendship was deeper and deeper.

At the moment, Hania is a graduate of law at the University of Adam Mickiewicz in Poznan, but her career path is far from chancery desk. John graduated from the Academy of Music in Poznan at the Department of Vocal and Acting. Now he acts on the stage of the Musical Theatre in Poznań.

For years, they are the leading dancers Folk “Wielkopolanie”, not only because of their ability to dance and acts, but also thanks to many years of involvement in the life of the team. Both are a folk dance instructors. Since 2010, they tach in folk group “Marynia” in Cultural Center in Wronki. They also organise Polish National Dances Tournament of “Wielkopolski Bat”. Their team regularly raises their skills and artistic level. Their wards take the top places at national events, and they are appreciated by local authorities.

They are active also in the NGO – Association of Friends of Folk Culture “Otwórz się na folklor”. They organize together a Regional Review of Folk Songs “Kukułeczka” and are actively involved in the organization of the International Children’s Folklore Festival KIDS FUN FOLK. Also they organize trainings for teachers and instructors of folk dance. They promote Polish folk culture at every step.

Since 2014, Hania is the manager of the “Wielkopolanie” and prepares pairs to participate for the Polish Nationwide Dance Tournament. Taking into consideration their activity in the folklore world it could not miss the folk accents at the Hania and Jan wedding . The church gathered many guests, there were also more than 100 people in costumes. Dancers of the Children’s Folk Group “Cepelia-Poznań” in costumes of Krakow, proteges of Folk “Marynia” in costumes from Szamotuły and friends from “Wielkopolanie” in costumes: bamberskich and biskupiańskich. The guests joined in the liturgy by reading Scripture, singing or bringing gifts. After the oath of love, in the church sounded thunderous applause. At the end of the liturgy there was a touching moment when all three teams to the accompaniment of the band, sang “Black Madonna”.

Under the church rang songs from Wielkopolska, what made nice atmosphere for guests waiting for wishes.

Wielkopolanie donated their a dream gift – all works of Oskar Kolberg about the Duchy of Posen, hoping that reading them will result in future beautiful scenic presentations.

We wish the couple only wonderful days and further enthusiasm to work for Polish culture.