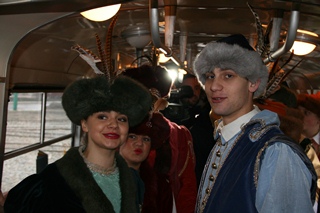 oric tram.
With the support of MPK (Polish: Miejskie Przedsiębiorstwo Komunikacyjne) and “Klub Miłośników Pojazdów Szynowych” “Wielkopolanie” launched celebrations of 50th anniversary of the group with a Christmas carols concert. The tram traveled twice from the stop on Zeyland street and circulated on the route of tram No.2.

The most beautiful Polish carols and folk pastorals were eagerly sung by the crowd of gathered Poznan citizens. Attending townsfolk had the opportunity to sing a carol of their choice along with the cho

ir and musicians from Folk Group “Wielkopolanie”. For all the bold to do so group prepared surprises. Festively decorated tram resounded with joy on the streets of Poznan until late afternoon.

That day “Wielkopolanie” began their anniversary celebrations, which will last until November, in which a jubilee concert will be held. 50 years of history is not just five decades of popularization and cultivation of Polish folklore, but it is also a great story written every day by thousands of people. This unique event requires a special setting. Throughout the 2012 “Wielkopolanie” will be attached to lots of attraction, plenty of events and concerts.