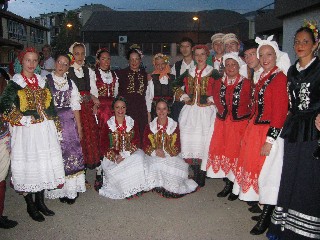 First stop in that trip, before Montenegro, was Bratyslawa. After all-day sightseeing of our south neighbor’s capitol “Wielkopolanie” went straight to Montenegro. In Herceg Novi, they were kindly welcomed by the manager of Montenegro’s Folkloristic Group “Ilija Kisic”. In Herceg Novi took place first performance of polish group – on the terrace of “Oaza” hotel. Polish songs and dances attracted attention of many people, who wanted to see presented dances from Wielkopolska and other regions of our country. Next day, by sunset, took plac

e march of polish and montenegro’s group to the Old Town of Herceg Novi. At third day after performance at morning, “Wielkopolanie” left Montenegro to see and enjoy next Balkan country – Serbia. But, that’s not the end of acquaintance between “Wielkopolanie group and „Ilia Kisic” group. Soon in May Montenegro’s group is going to show it’s country’s folklore on polish ground.

performed in three cities: Socanica, Lesak i Leposavic. In Lesak polish dancers with other folkloristic groups were entertained by priest of the Orthodox Church and they danced and sang for him.
Polish Folklore presented by “Wielkopolanie” seemed to be very exotic comparing to the Balkan’s folklore. They took applause from over six thousand people gathered during every performances. After each one group was participating in integrating meetings, whey they had possibilities to learn other nation

al dances. After 3 days of stay in Serbia dancers had possibilities to see Orthodox churches and see one of the biggest Serbian cities – Kosowska Mitrowice.

Each church was on the top of other mountain, so “Wielkopolanie” had beauty landscapes to see. It was very pity for dancers to leave Balkan’s folkloristic festivals. During way home “Wielkopolanie” also had possibility to see monuments of Budapest. After returning to Posnan, members of the group had no time to rest. Just at 5th of September they are going to perform in Lubon and at 6th of September in Mieścisko during harvest festival and Michalowskie Fair.

Management and Dancers from the group
Wish to give special thanks to
Ms Monika Obojska
For help in organization of
Balkan artistic tournee !!!