ANOTHER PAIR AT THE ALTAR 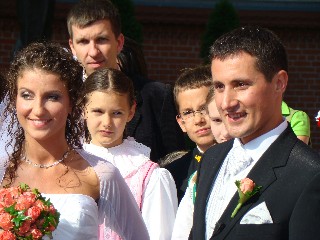 In the sunny afternoon on the 21st of June 2008 in beautifully renewed Church of Mater Dolorosa dancers of Folk Group “Wielkopolanie” – Katarzyna Seredyńska and Grzegorz Lesiuk appeared at the altar.
Betrothed pair came to the church just few minutes before 4 p.m. They have been welcomed by all dancers and musicians of the Group worn in colorful cloths from the cities of Łowicz and Kalisz. Great surprise for Kasia and Grzesiu were other dancer’s children also wearing regional dresses: 6 months old Tymon and 4 year old Zosia as well as 2 year old Marysia (in dress from Szamotuły). Pair entered into the church assisted by members of the Children’s Folk Group “Cepelia-Poznań” and Folk Group “Wielkopolanie”.
For Kasia and Grzegorz the world of folk dance is their whole life. Since they were 7 years old they have started their adventure with dance first in the Children’s Folk Group “Cepelia-Poznań” and then at 15 years old in the Folk Group “Wielkopolanie” where they are dancing until now.

Grzegorz has spent more than 6200 hours at the reversals, has taken part in 1500 presentations and has gone more than 50 times to foreign tournees and Kasia not less. Their common story also took the beginning within sight of the other dancers during tournee at the Universiade and Expo in Korea in 2003.
When Katarzyna and Grzegorz said “Yes” you could hear a great ovation in the church and in the eyes parents and friends you could see tears of affection. In front of the church musicians were expecting newlyweds and after the ceremony together with dancers they played and singed traditional “Sto lat” and other songs from various regions of our country.

According to the tradition the pair has been brought to a stop so that they had to give some small traditional presents to the members of a Group.
At the wedding party Kasia and Grzegorz have danced national dance called Kujawiak and Grzesiu has sang his favourite song Poznanianka.
As a present for a newlyweds “Wielkoplanie” have presented a suite of regional dances and songs.

Wonderful wedding party promise a lot of happiness and joy in their marriage and that is what the managers and all dancers and musicians of Folk Group “Wielkopolanie” are wishing to Katarzyna and Grzegorz.