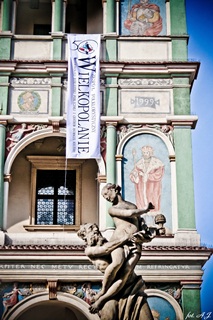 On the 4th of March for the nineteenth time in Poznan, has revived the tradition of seventeenth century Lithuania. Kaziuk is a day of patron saint of Poland and Lithuania – S

t. Kazimierz, who died on March 4, in 1484 in Grodno. He was nearly 26-year-old prince, would-be heir to the throne after Kazimierz Jagiellończyk. Canonization ceremonies were held in 1604 in Vilnus. The Vilnus Cathedral is the sarcophagus.

This year’s celebrations began with the procession of King Kazimierz to the Poznan City Hall. Dancers and musicians of Folkloristic Group “Wielkopolanie”, flageolets from Swarzędz City and the guests from Lithuania were participating in the procession. Just before the stroke of twelve o’clock on the façade of City Hall, dancers performed chants for the large gathered audience. On the occasion of the Jubilee, a giant flag of folk group “Wielkopolanie” was hung next to Jagiellons Crests. After playing the bungle call of Poznan and Vilnius, “Wielkopolanie” presented their artistic program on main stage. In the specially designed program for the event were dances from Bamberg, Rzeszow, Lowicz, Krakow and also national dances. Flageolets, guests from Lithuania and Polish Artistic Song and Dance Group “Wilia” also appeared on stage.

is also a traditional market in which citiz

ens procure themselves with the Christmas palms. At the stalls you could buy Kaziuk’s hearts, black Vilnius bread, zeppelins and pancakes. On the first Sunday of March about 20 thousand people (according to organizers) tried frontiersmen specialties and admires our 50-year Jubilee on the Old Town Market.

In the capital of Wielkopolska, the pilgrimage fair is organized by the Society of Friends of Vilnius and Vilnius Land, which it wants to bring traditions and history of Vilnius to Poznan citizens.

Management and Dancers of Folkloristic Group “Wielkopolanie” make sincere thanks to Mr. Ryszard Liminowicz and all employees of Society of Friends of Vilnius and Vilnius Land.